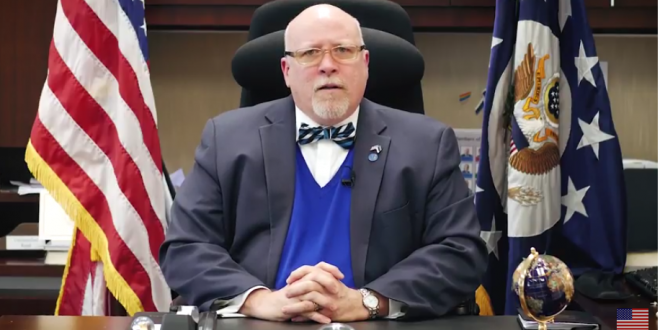 US Ambassador To Estonia Resigns Because Trump

The U.S. ambassador to Estonia, James D. Melville Jr., a career diplomat and member of the senior foreign service ranks, announced to friends Friday that he was resigning amid a string of controversial comments President Donald Trump made about U.S. allies in Europe.

Melville, who has served as a diplomat for 33 years and as ambassador to Estonia since 2015, was due to retire soon but said in a private Facebook post announcing his retirement that Trump’s behavior and comments accelerated his decision.

“For the President to say the EU was ‘set up to take advantage of the United States, to attack our piggy bank,’ or that ‘NATO is as bad as NAFTA’ is not only factually wrong, but proves to me that it’s time to go,” he wrote, citing Trump’s reported comments in recent weeks that have unnerved U.S. allies.

A related story from Deutsche Welle:

US President Donald Trump sent letters to eight NATO members cautioning them about not meeting their spending commitments, Belgian Prime Minister Charles Michel said on Friday.  “I am not very impressed by this type of letter,” Michel told reporters on the sidelines of an EU summit in Brussels.

“Belgium has halted the systematic fall in defense spending and takes part in a lot of military operations,” he added. Germany, Italy, Spain, Portugal, Luxembourg, Norway and the Netherlands also received individual letters that were personally signed by the US leader, a diplomatic source told the AFP news agency.

Trump will attend a NATO summit in Brussels shortly before his meeting with Putin in two weeks. NATO members are reportedly bracing for the usual nastiness.