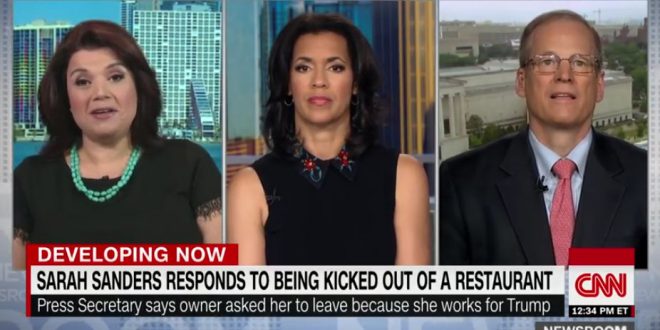 Ana Navarro: Getting Kicked Out Of Restaurants Is The Cost Of Being An Accomplice To Trump’s Cruelty

Ana Navarro said this afternoon people are clearly bothered to see President Trump “lie and lie and lie.” And while some people are offended by baking cakes for gay couples, she added, “some people find the idea of tearing children away from their families and then lying about it morally offensive.”

She said she does feel badly Huckabee Sanders’ family had to witness that, but also said, “You make choices in life. And there is a cost to being an accomplice to this cruel, deceitful administration.”

Former Congressman Jack Kingston, meanwhile, said this was outrageous and symptomatic of how Americans are becoming more and more divided and can’t come together with people they disagree with.

Love you Ana, but there is no equivalence here and you’re doing a disservice offering this up as a parallel issue.