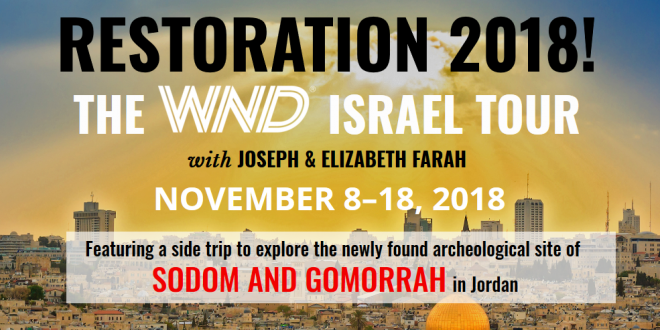 Like many far-right outfits, World Net Daily makes side money by brokering guided tours of Christian sites in the Middle East. For their November trip, WND founder Joseph Farah, his Just For Men mustache, and his wife offer a full-day excursion to the site where God allegedly murdered homosexuals because he loved them so fucking much.

Nothing strengthens your faith in the God of Israel than a visit to His Holy Land. Nothing else brings you closer to Him. That’s why Joseph Farah has been going there for 40 years. He and his wife, Elizabeth, offer a unique perspective in their teachings at all the sites and in their formal presentations. Their focus in the Coming Kingdom of God on Earth ruled and reigned over by Jesus-Yeshua, the King of Kings in Jerusalem.

On arrival at King Hussein Bridge, you will be met by your guide(s) who will assist you with visa and passport formalities, and then direct you to your buses. Drive 20km south of the King Hussein Bridge towards Tal El Hammam – the site of the biblical cities of Sodom & Gomorrah that were destroyed by fire and brimstone. Sodom and Gomorrah were two of five cities referred to in Scripture as the Cities of the Plain.

Perhaps obviously, there is no proof that Sodom and Gomorrah ever existed. The Family Research Council and the Liberty Counsel also offer regular tours of the region.