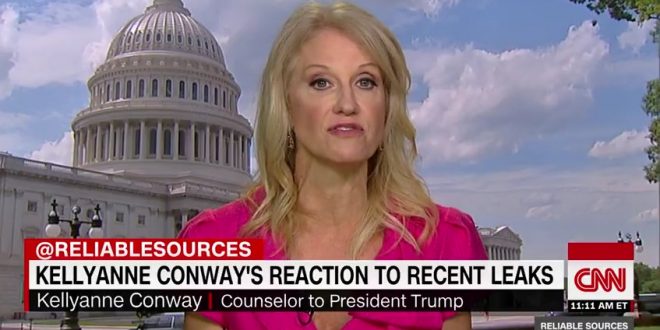 Here’s just one bit via Mediaite:

The Reliable Sources host moved on to press about leaks coming out of the White House, asking if any staffers have been fired, and after Conway took a swipe at the media for its coverage, Stelter fired back: “Why the constant attacks?”

“Are you really arguing there’s not that many leaks out of the White House?” Stelter asked. “Yeah, I would argue that,” Conway replied. “There’s been an unprecedented number of leaks,” Stelter said. “It’s shocking.”

The debate then moved on to Trump’s attacks on the press, with Stelter noting that the president is “tearing down our American media and other institutions in ways that are going to cause long and lasting damage.”

Stelter said he didn’t vote for President @KellyannePolls: “You probably thought she didn’t need your help.”

“How did your wife vote? Tell America!” @KellyannePolls says to @brianstelter in answer (?) to Q’s about Russia.. weeks after she erupted when @DanaBashCNN asked her about why her husband tweets undermining msgs about the president.

Legitimate question. Ask her if the white Nazi who murdered 10 people and injured others in Texas is an animal.

Have you ever had Kellyanne Conway on your show and then after said “Wow! I’m glad she came on!”

The answer is no.

Stop bringing her on.

Previous Father Of Parkland Victim Rages At “Idiotic” Texas Lt. Gov. Dan Patrick: He Should Be Removed From Office
Next Glorious Leader “Hereby Demands” That The DOJ Investigate Whether The DOJ Infiltrated His Campaign