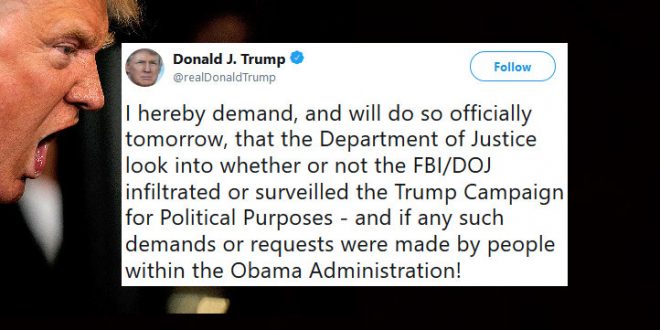 President Donald Trump said Sunday that he will demand that his Justice Department look into whether it or the FBI spied on his presidential campaign for political reasons. The FBI dispatched a confidential source to speak with some advisers to Trump’s presidential campaign about its possible ties to Russia, according to multiple reports Friday. lthough Trump has suggested the source was embedded in his campaign, US officials have told CNN that was not the case.

I hereby demand, and will do so officially tomorrow, that the Department of Justice look into whether or not the FBI/DOJ infiltrated or surveilled the Trump Campaign for Political Purposes – and if any such demands or requests were made by people within the Obama Administration!

I hereby demand? Dude, c’mon this is Twitter. Do you also ‘hereby demand’ that your McDonald’s order is supersized at the drive through? Carries about the same weight. Who the fuck is supposed to be watching you today?

I hereby can’t stop laughing that Trump wants to hang a light on fact his campaign was a criminal enterprise https://t.co/waRP4YKBIw

ARE YOU A SPY? I HEREBY DEMAND TO KNOW! #Trump pic.twitter.com/NNjeml7zKX

Hey @realDonaldTrump, if you’re going to “hereby demand” on Twitter, you should unblock citizens like me, @eugenegu, @adamcbest, @AynRandPaulRyan, @PSYCH_HYPE, @Underrated_Dom, @joepabike & so many others. Otherwise, you are simply grandstanding for select devotees, which is lame pic.twitter.com/odlcOeDBZ7

Dear @realDonaldTrump: The counterintelligence agents of the @FBI work for the American people, not any political campaigns. If they infiltrated your campaign it would have been to stop a foreign power.

Your smearing of the FBI harms our country & shows desperation on your part https://t.co/W6UJPcM7H4