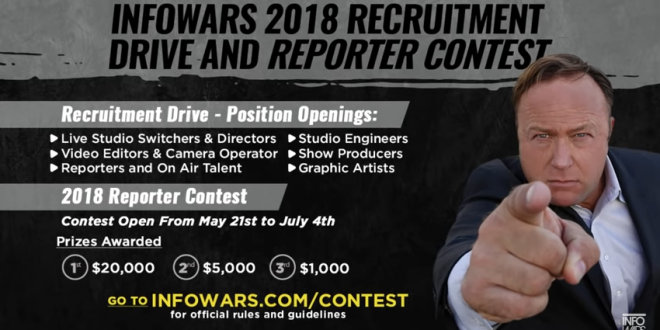 Infowars creator Alex Jones said that he was looking to hire “around 15 people, maybe even more” in order to transform Infowars into a 24-hour live television broadcast.

A video uploaded this morning advertises the network’s new recruitment drive, which Jones told viewers is aimed at taking Infowars live to television for 24-hours a day, a major expansion from the network’s current weekday programming from 9 a.m. to 7 p.m. Eastern Time.

“We are launching our biggest recruitment and hiring operation ever in our 23-year history as we prepare to go 24 hours a day live on TV and radio from the Infowars news center here in Austin, Texas,” Jones said.

Previous Hugh Hewitt: Schools Should Ban Trench Coats
Next NRA Offers Thoughts And Prayers For Victims Because “Taking God Out Of Our Culture Is Partly To Blame”