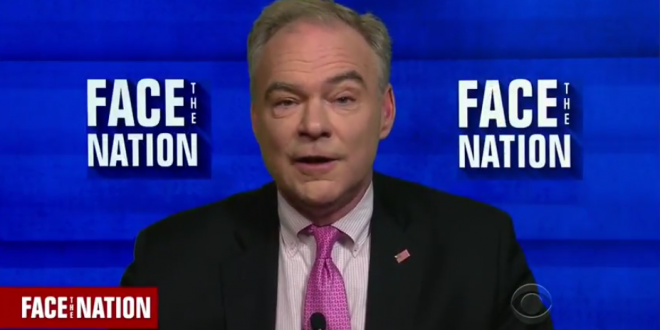 From the transcript of Sen. Tim Kaine’s interview this morning with Face The Nation host Margaret Brennan:

KAINE: Margaret, I’ve decided to vote against him to be secretary of state. I did vote for him as CIA director. He has an intel background that I thought suited him for the position. But look, we have a president who is anti-diplomacy. And I worry that Mike Pompeo has shown the same tendency to oppose diplomacy. He was not just against the Iran deal when he was a House member, but he spoke about the relative ease of wiping out Iran’s nuclear capacity with a bombing run. He has supported regime change–

BRENNAN: Well, Senator, that’s significant you are saying that you’re not going to vote for him because this would mean he’s the first nominee to be secretary of state to not get a favorable recommendation by that committee. But this still doesn’t stop him from becoming America’s top diplomat.

BRENNAN: He can still get confirmed.

.@timkaine announces he will vote against Pompeo for SecState says he believes he would exacerbate Trump weaknesses rather than uphold diplomatic legacy. On divided committee if GOP Sen Rand Paul remains opposed Pompeo may win on the floor but not with Foreign Relations support

Now more than ever, we need a Secretary of State who will stand strong for vigorous diplomacy, not exacerbate President Trump’s proclivity towards conflict. Unfortunately, Mike Pompeo has often demonstrated a similar disposition against diplomacy, so I will oppose his nomination.

Sen. @timkaine on his past criticism of @Comey: Clear double standard of how FBI and James Comey handled investigations during the 2016 campaign. Comey is a good man who made a very consequential blunder. The blunder that he made had a huge consequence.