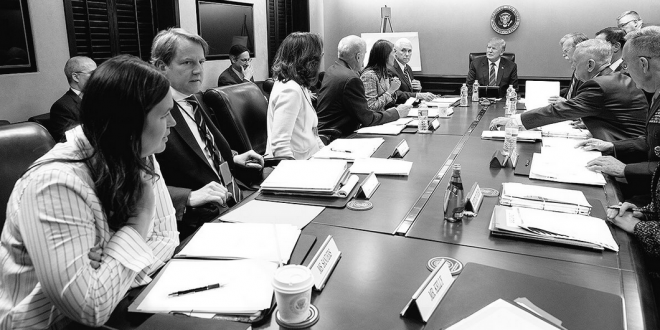 Donald Trump’s press secretary issued a begrudging clarification on Sunday after being accused of posting a misleading photograph of the president online.

Sarah Sanders was criticised for a tweet on Saturday that appeared to show Trump busily directing missile strikes against Syria from the White House situation room, with vice president Mike Pence at his right hand.

“Last night the President put our adversaries on notice: when he draws a red line he enforces it,” Sanders wrote as a caption.

Keen observers promptly noted that the photograph could not have been taken on Friday as the attacks were mounted – because by then Pence had arrived in Peru to deliver remarks at the Summit of the Americas.

Last night the President put our adversaries on notice: when he draws a red line he enforces it. (Inside the Situation Room as President is briefed on Syria – Official WH photos by Shealah Craighead) pic.twitter.com/GzOSejdqQh

Fun fact: This picture is NOT from last night as Mike Pence is mysteriously in the room while also out of the country.

There is NOTHING @PressSec won’t lie about. https://t.co/k2YBVBFdHv

Even though @VP Mike Pence was in Peru at the time, @PressSec Sarah Sanders circulates photo that she says shows the Situation Room as Trump is being briefed on #Syria. https://t.co/3PKwpVdPum

Sarah Sanders wanted really badly to have a dramatic photo of the decision to bomb Syria. It didn’t work out so well. A play in two acts. pic.twitter.com/C7tXDhXGe5

Pence is in this photo.
Pence was in Peru.
Nothing @PressSec says or posts is true.
Ever.
And we pay her salary. https://t.co/iFvbRcpGCP

As I said, the President put our adversaries on notice that he enforces red lines with the strike on Syria Friday night. The photo was taken Thursday in the Situation Room during Syria briefing.