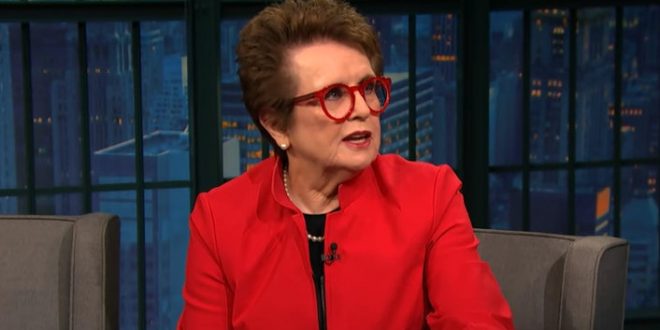 New York City Pride today announced that tennis legend and LGBT activist Billie Jean King will be the grand marshal of this year’s Pride parade. As someone said just now on my Facebook page, “Take THAT, Margaret Court!”

Rather interestingly, this year’s parade will also reverse its traditional direction. From the press release:

This year’s NYC Pride March also undergoes a change to its iconic route along 5th Avenue. The route proceeds through the West Village and Midtown, passing by the historic Stonewall Inn, and ends on 29th and 5th Avenue. This route also aims to reduce the overall time of the March procession, and reduce wait times for the more than 350 marching groups prepared to step off.

In addition to Ms. King, this year’s grand marshals are Lambda Legal, writer Tyler Ford, and Kenita Placide, the Executive Director of the Eastern Caribbean Alliance for Diversity and Equality. Previous PENNSYLVANIA: Anti-Gay Bridal Shop To Close Rather Than Comply With Impending LGBT Rights Ordinance
Next Hope Hicks To House Intel Panel: My Email Was Hacked