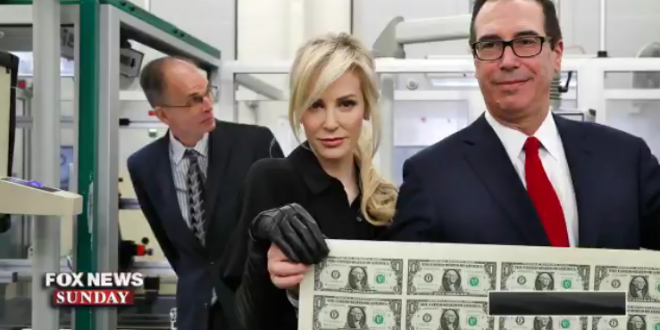 Mnuchin: I Look Like A Bond Villain? Cool! [VIDEO]

Treasury Secretary Steve Mnuchin on Sunday said he takes it as a compliment that some people suggested that he and his wife looked like villains from a James Bond movie when they posed with newly printed currency.

“I never thought I’d be quoted as looking like villains from the James Bond. I guess I should take that as a compliment that I look like a villain in a great, successful James Bond movie,” Mnuchin said on “Fox News Sunday.”

Mnuchin and his wife, Louise Linton, caused a stir on social media last week when they posed with a sheet of newly printed dollar bills, the first bearing Mnuchin’s signature.

Sec Mnuchin on @FoxNewsSunday responds to criticism over photos of him and his wife posing with dollar bills featuring his signature: “I never thought I’d be quoted as looking like villains from the James Bond, I guess I should take that as a compliment.” pic.twitter.com/hoggpXFj0a

Treasury Secretary / aspiring Bond villain Steve Mnuchin’s “signature” on our currency is not a signature. pic.twitter.com/9ICIESpyNG

When you try and explain something and end up reinforcing everyone’s views… “I was very excited of having my signature on the money” https://t.co/no4FGVxNjD