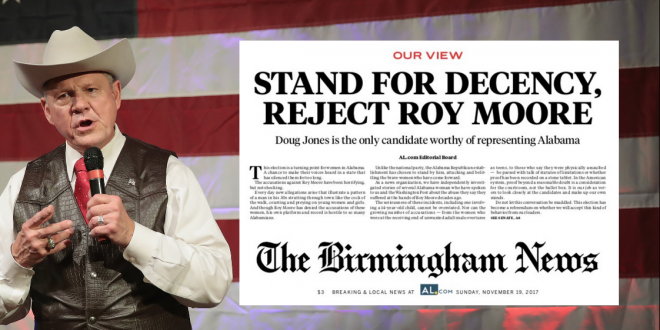 From the editorial board of the Birmingham News:

The seriousness of these incidents, including one involving a 14-year-old child, cannot be overstated. Nor can the growing number of accusations — from the women who were at the receiving end of unwanted adult male overtures as teens, to those who say they were physically assaulted — be parsed with talk of statutes of limitations or whether proof has been recorded on a stone tablet. In the American system, proof beyond a reasonable doubt is a consideration for the courtroom, not the ballot box. It is our job as voters to look closely at the candidates and make up our own minds.

Do not let this conversation be muddled. This election has become a referendum on whether we will accept this kind of behavior from our leaders. Alabamians have never cared about what the rest of country thinks of them. And we do not expect all the handwringing from national pundits, conservative or liberal, to make much of a difference. This election isn’t about what a late-night comedian may think of Alabama or whether Sean Hannity can sell advertisements; it’s not about Saturday Night Live or Mitch McConnell. It’s not about Breitbart or National Democrats. It is about the moral values of the people of Alabama.

The piece goes on to carefully characterize Doug Jones as “moderate Democrat” who while pro-choice, only backs abortion law “as it is currently written.”