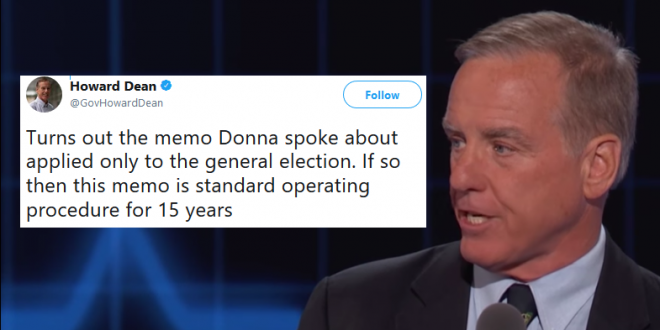 Former Democratic National Committee (DNC) chair Howard Dean said Friday an agreement between Hillary Clinton and the DNC was “standard operating procedure.” Brazile said this week in an excerpt from her upcoming book that an agreement between Clinton and the DNC was “unethical” and harmed Sen. Bernie Sanders’s (I-Vt.) chances against Clinton in the Democratic primary.

The Democratic National Committee struck a deal with Hillary Clinton in 2015 that gave her campaign input on some party hiring and spending decisions, but required they be related only to preparations for the general election, according to a memo obtained by NBC News. It also left the door open for other candidates to make similar arrangements.

The memo stipulates the DNC had to hire a communications director by September 11, 2015, months before the first nominating contests in early 2016. However, the memo also made clear that the arrangement pertained to only the general election, not the primary season, and it left open the possibility that it would sign similar agreements with other candidates. The Sanders’ campaign later signed its own joint fundraising agreement with the DNC, but did not utilize it.

Turns out the memo Donna spoke about applied only to the general election. If so then this memo is standard operating procedure for 15 years https://t.co/fsU1kMZoSp