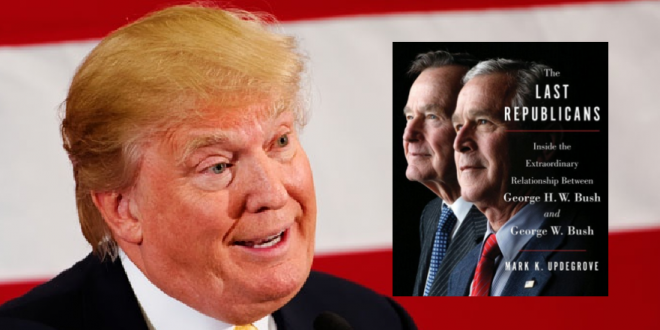 Those stinging comments mark the first time the former presidents are speaking out about Trump in such stark terms, as part of a new book about the father and son by historian Mark Updegrove, titled “The Last Republicans.”

Both men went on the record to give Updegrove their candid assessment of Trump, as well as rare insight into their thoughts on the 2016 presidential race as the drama unfolded.

The most critical comments about Trump came from the elder Bush, now 93, who told Updegrove in May 2016, “I don’t like him. I don’t know much about him, but I know he’s a blowhard. And I’m not too excited about him being a leader.”

Neither of the two Republican former presidents voted for Mr. Trump — the father voted for Hillary Clinton and the son voted for “none of the above,” as he told Mr. Updegrove.

Indeed, at one point during the 2016 presidential campaign, the younger Mr. Bush confided to the author, “I’m worried that I will be the last Republican president.” That inspired the title of the book — which will be published Nov. 14 by HarperCollins — as a quote that seemed to carry a double meaning.

When Mr. Trump first entered the race, Mr. Bush thought he would not last and was surprised by the real estate developer’s success at capturing the nomination. Still, he was not impressed.

When Mr. Trump declared that “I’m my own adviser,” Mr. Bush thought he did not understand the presidency. He also lamented Mr. Trump’s lack of humility. “As you know from looking at my family, it is a certain heritage, that’s what they expect, and we’re not seeing that” in Mr. Trump.