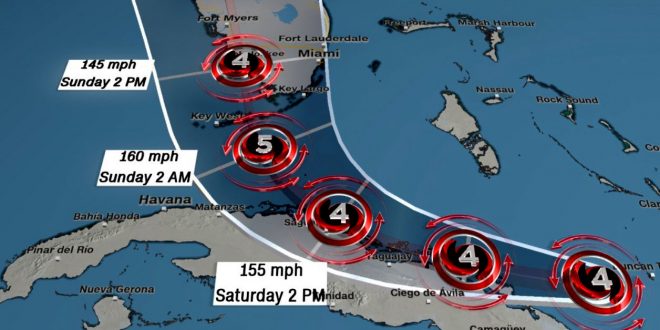 The newest projected path for Hurricane Irma shows it regaining strength after it passes Cuba and making a Florida landfall as a Category 5 storm. Irma is then expected to move over Florida and then continue through Georgia and west over Huntsville, Alabama as it loses hurricane status.

On Friday morning, Irma was headed for the Bahamas with 180 mph sustained winds with gusts over 200 mph. It is expected to cause extensive damage in the islands. The storm slowed down to about 12 mph as it moved in a slightly more westerly direction. It is expected to make landfall in the Keys and then in Southwest Florida near Naples.

***NOWHERE IN THE FLORIDA KEYS WILL BE SAFE***

***YOU STILL HAVE TIME TO EVACUATE***

Previous Christian Prophetess Kat Kerr Waves Scepter To Crush Hurricane Irma With “The Authority Of Jesus” [VIDEO]
Next Trump: Churches Should Be Entitled To FEMA Funds