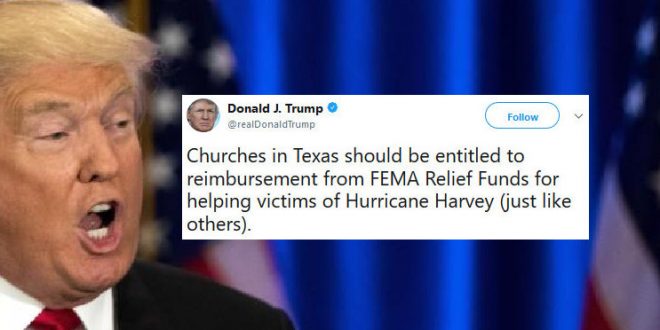 Trump: Churches Should Be Entitled To FEMA Funds

President Trump is taking the side of three Texas churches that are suing the Federal Emergency Management Agency over disaster relief funds in the wake of Harvey.

The lawsuit comes three months after the Supreme Court ruled that a church in Missouri could use federal funds to resurface the playground, which experts told the Texas Tribune could set a precedent for similar cases. A Justice Department spokeswoman has told the Chronicle it is “aware of the complaint and will examine the claims.”

Trump’s call for the churches to be treated “just like others” could be seen as a call for equal treatment of secular non-profits and religiously-based organizations in how FEMA divvies up its disaster relief funds.

It is unclear whether President Trump’s call would similarly apply to mosques, synagogues and other religious institutions potentially damaged in Texas during the storm.

Though President Trump did not explicitly reference the churches by name, the public endorsement of the legal actions facing his federal agency could serve as a complicating factor in the case.

Churches in Texas should be entitled to reimbursement from FEMA Relief Funds for helping victims of Hurricane Harvey (just like others).

Then they should pay taxes

Joel Osteen better not get one red cent

Send all his FEMA money to Mattress Mack

They should get federal tax dollars that they don't pay in to?

Previous Irma Now Forecast To Make Landfall At Category 5
Next Tony Perkins Celebrates The DOJ Siding With Anti-Gay Baker: Trump Is On The Right Side Of Religious Liberty