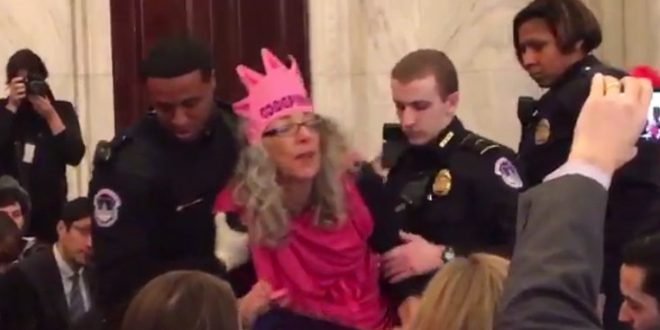 A D.C. judge has tossed out a jury’s conviction of a protester who laughed during Attorney General Jeff Sessions’ Senate confirmation hearing, finding on Friday that the government had improperly argued during the trial that her laughter was enough to merit a guilty verdict. The judge ordered a new trial in the case, setting a court date for Sept. 1.

Desiree Fairooz, 61, who was associated with the group Code Pink, had been convicted of disorderly and disruptive conduct and demonstrating inside the Capitol.

Fairooz was taken into custody during a Senate Judiciary Committee hearing in January after she laughed when Sen. Richard Shelby (R-Ala.) claimed Sessions had a “clear and well-documented” record of “treating all Americans equally under the law.” (The Senate rejected Sessions’ nomination for a federal judgeship in the 1980s over concerns about his views on race.)

Previous Chechen President: Gays Are Inhuman Devils And We Must “Purify Our Blood” By Removing Them [VIDEO]
Next Former Soviet Spy Who Met With Junior Worked With Company That Created The Pissgate Dossier