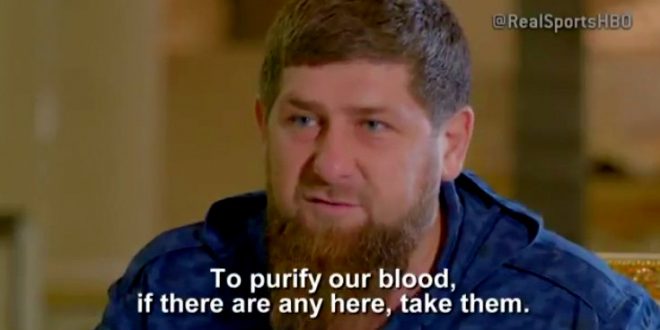 Chechen President: Gays Are Inhuman Devils And We Must “Purify Our Blood” By Removing Them [VIDEO]

Chechen President Ramzan Kadyrov sat for an interview with David Scott from Real Sports and it’s shocking. There are reports 27 people were recently murdered by the government – killed because they were gay, something the government has denied because the party line is that there are no gays in the country.

And there’s more. Kadyrov challenges America, saying “Even if our government were completely destroyed, our nuclear missiles would be automatically deployed. We will put the whole world on its knees and screw it from behind.” Real Sports did the interview because it is doing a piece on MMA in Chechnya.

NEW: @RealSportsHBO is 1st western outlet to get interview w/ the Head of the Chechen Republic who is one of Putin’s strongest allies (cont)

2. Kadyrov says if there are any gay people in Chechnya they should be removed in order to purify the blood of the Chechen people. pic.twitter.com/oTshkbFGLO

3. In an interview with @RealSportsHBO one of Putin's biggest allies says "we will put the world on its knees and screw it from behind." pic.twitter.com/nYpu78nDDy