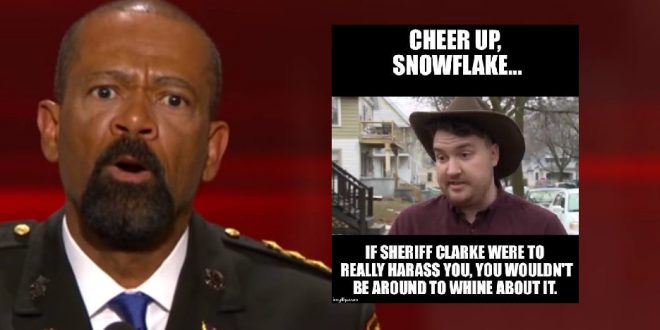 Sitting on the tarmac at the Dallas/Fort Worth International Airport on Jan. 15, Milwaukee County Sheriff David A. Clarke Jr. sent a text message to one of his captains after a brief verbal exchange with a passenger. The sheriff explained in the text what should be done when Riverwest resident Dan Black got off the plane.

“Just a field interview, no arrest unless he become an asshole with your guys,” Clarke wrote Captain Mark Witek. “Question for him is why he said anything to me. Why didn’t he just keep his mouth shut?”

“Follow him to baggage and out the door,” Clarke continued. “You can escort me to carousel after I point him out.” A copy of the text messages was provided by an attorney for Black, who is suing the sheriff, Milwaukee County and several unnamed deputies over the incident.

Milwaukee County auditors are also conducting their own investigation into whether Clarke was guilty of waste or abuse of county resources. But Clarke has refused to cooperate with the probe, calling it a “fake investigation.” The Milwaukee County Board gave auditors the authority to spend up to $35,000 to sue Clarke for blocking the investigation — a matter that is now on hold.

Copies of the text messages and video of Black’s arrest are at the link. Last week Clarke claimed to have landed a senior post at Homeland Security but so far the feds have declined to confirm the offer. Some believe the offer is on hold after CNN exposed Clarke for having plagiarized many parts of his master’s thesis.