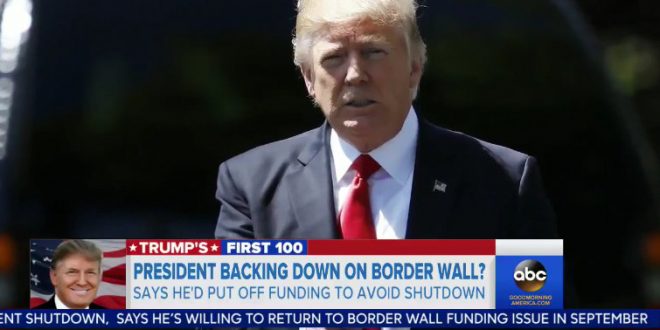 U.S. President Donald Trump indicated an openness on Monday to delaying his push to secure funds for his promised border wall with Mexico, potentially eliminating a sticking point as lawmakers worked to avoid a looming shutdown of the federal government.

Trump, in a private meeting with conservative media outlets, said he may wait until Republicans begin drafting the budget blueprint for the fiscal year that starts on Oct. 1 to seek government funds for building a wall along the U.S.-Mexico border, the White House confirmed.

Trump, whose approval ratings have slid since he took office, is facing a Friday deadline for Congress to pass a spending bill funding the government through September or risk marking his 100th day in office on Saturday with a government shutdown. “Now the bipartisan and bicameral negotiators can continue working on the outstanding issues,” Senate Democratic leader Chuck Schumer said in a statement on Monday night.

Good for the US that @POTUS is taking the wall off the table in negotiations. Now negotiators can continue working on outstanding issues.

Previous IDAHO: Chobani Yogurt Sues Alex Jones For Falsely Linking Company To Sexual Assault By Immigrant
Next Anderson Cooper Warns Against Being Desensitized To Trump’s Habit Of Lying About Everything [VIDEO]