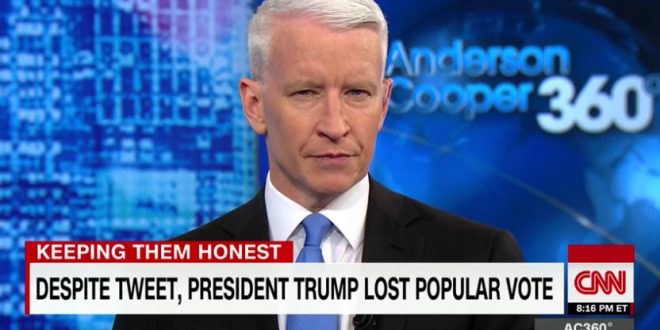 CNN’s Anderson Cooper wasn’t happy with President Donald Trump’s habit need to spread false information. On Monday’s “AC360,” Cooper warned that believing Trump’s “fake facts” could desensitize Americans to the truth that former Secretary Hillary Clinton won the popular vote. “I don’t even know that I need to say this, he did not beat Hillary Clinton in the popular vote,” Cooper said. “She beat him by almost 2.9 million votes.”

Trump made the claim Sunday for the first time in a few months. The last time Trump was seemingly obsessed with the size of his win was also when he was laser-focused on the size of his inaugural crowd. “This might seem like a minor point, sour grapes from Democrats, old news not even worth mentioning,” Cooper continued. “But let’s just think for a moment how unusual it should be for a president of the United States to cavalierly and repeatedly say things that are simply not true. It isn’t something we should be desensitized to.”

AC: We shouldn’t be desensitized to the president saying things that simply are not true #KeepingThemHonest https://t.co/Xet4hiVBFJ

New polls out today are very good considering that much of the media is FAKE and almost always negative. Would still beat Hillary in …..