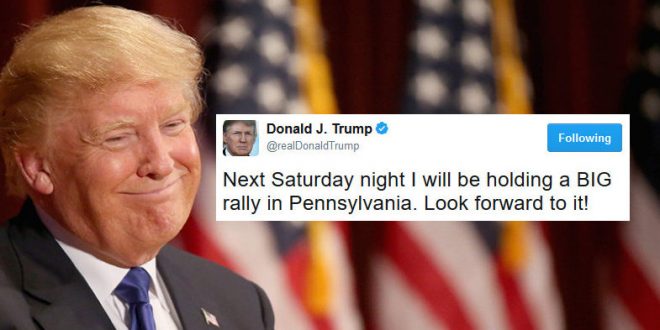 Trump’s decision to skip the correspondents dinner and hold a rally on the same night as the event may put White House reporters in a tough spot, forcing them to choose between attending the black-tie dinner and covering Trump’s rally in Pennsylvania.

Trump will be the first president to break tradition and skip the dinner since Ronald Reagan, who missed the event in 1981 while recovering from an assassination attempt and called in instead.

“I am not a hypocrite. And I haven’t been treated properly, and that’s OK, that’s fine,” Trump previously said of his historic decision. White House staff also announced last month they would be skipping the dinner “out of solidarity.”

But the president isn’t the only one who will be offering counter programming on April 29. TBS’ Samantha Bee, whose Full Frontal has been skewering Trump since the 2016 election, will also be holding her own event, “Not the White House Correspondents’ Dinner,” at the Willard Hotel in the nation’s capital. The event will raise funds to support the Committee to Protect Journalists.