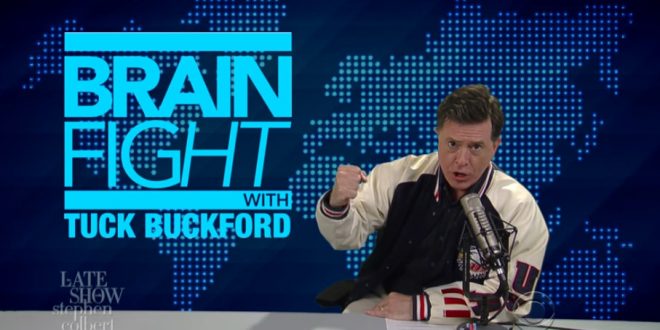 Stephen Colbert continued to mock “conspiracy radio host and furious hard-boiled egg” Alex Jones Friday as the Late Show host offered more updates from Jones’ legal battle with is ex-wife, who argues that the Infowars yeller is “too unstable” to have custody of their children. In addition to name-checking Colbert during court proceedings, a fact that the Late Show host relishes, other recent Jones revelations include his alleged love of marijuana and “zebra steaks.”

Colbert then revived his Jones-spoofing Brain Fight host Tuck Buckford, who grunted about weed and giraffe meat. “Tuck’s a bit mellow today, because for your safety, I have been testing the strength of some of George Soros’ patented mind-control marijuana,” Buckford said as he readied a bong. “I do it once a year, then once an hour for a year, just like the brave men and women of the Coast Guard. You can really taste the butane.”