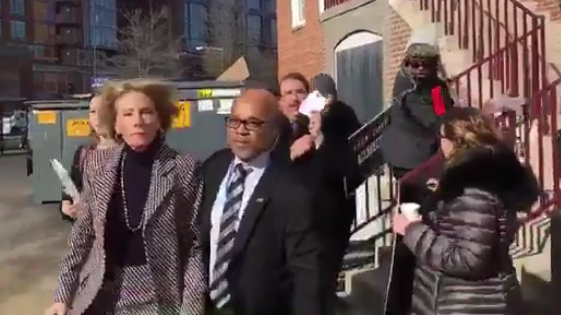 Has she ever been to a public school before? The Hill reports:

Education Secretary Betsy DeVos was greeted with protesters when she tried to enter a Washington middle school on Friday morning. A video from the scene shows DeVos walking away from one entrance of Jefferson Middle School after being physically blocked from the entrance. One protester stood in front of the stairway entrance in the school, and DeVos walked back to her vehicle. “Keep giving money to senators and buying your way to the position,” one protestor holding a Black Lives Matter sign says to her, according to a video from ABC reporter. “I hope you’re proud of yourself.” “Go back,” the protestor yells and she enters the car. “Shame! Shame! Shame!”

Sec. DeVos physically blocked by protesters from entering DC school–turned away and left. Unclear if she attempted another door. @ABC7News pic.twitter.com/buNgmOJbya