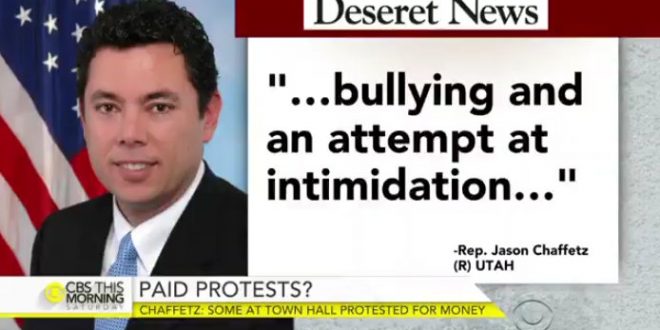 GOP Rep. Jason Chaffetz: Those People Who Booed Me Offstage Were Paid Protesters From Other States

Rep. Jason Chaffetz said the raucous reception he received at Thursday evening’s town hall meeting was “bullying and an attempt at intimidation” from a crowd opposed to President Donald Trump’s election. Chaffetz said the crowd that filled the auditorium at Brighton High School in Cottonwood Heights and spilled over into a protest outside included people brought in from other states to disrupt the meeting.

“Absolutely. I know there were,” he said, suggesting it was “more of a paid attempt to bully and intimidate” than a reflection of the feelings of his 3rd District constituents. Asked who would foot the bill to fill the audience with outside agitators, Chaffetz said, “do some reporting” and described how one participant made it a point to say he was not being paid by a national Democratic organization.