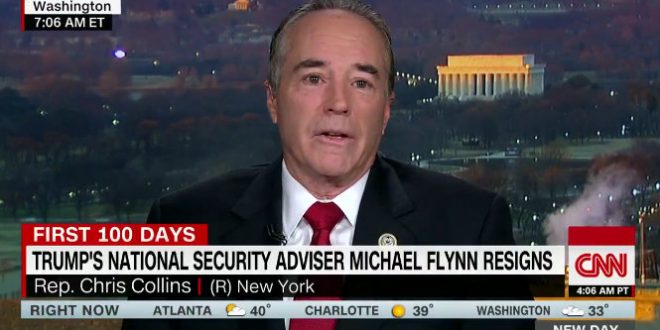 Rep. Chris Collins of New York, one of President Donald Trump’s most vocal supporters on Capitol Hill, is defending the administration after Michael Flynn resigned his post as national security adviser. Yet, most of his GOP colleagues are notably silent.

Collins was one of the few Republicans from either chamber making the morning television talk show rounds or even issuing written statements defending the Trump administration. By standing behind Trump, Collins very much is on a lonely island — for now, at least.

Asked why most of his GOP colleagues have remained silent since the White House announced that Flynn had stepped aside, Collins responded: “Well, it’s Valentine’s Day and I guess they’re having breakfasts with their wives.”

Cuomo: Why is GOP so quiet on Flynn?