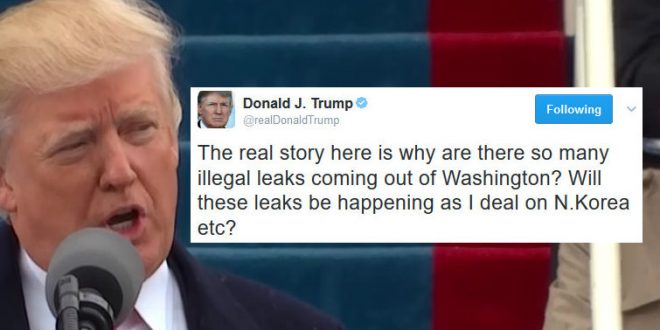 President Trump on Tuesday said the “real story” of National Security Adviser Michael Flynn’s resignation was “illegal leaks,” rather than reports Flynn misled senior White House officials about his conversations with Russia. “The real story here is why are there so many illegal leaks coming out of Washington? Will these leaks be happening as I deal with N.Korea etc?” Trump tweeted.

The White House announced Flynn’s resignation Monday night, the culmination of weeks of controversy surrounding alleged communications with Russia. During the campaign, Trump signaled affection for leaks that hurt Democrat Hillary Clinton. In October, he told the crowd at a campaign rally “I love WikiLeaks” as the group continued to release hacked emails from Clinton’s top aides.

Previous BURN NOTICE: Hillary Twists The Knife In Flynn Over Pizzagate, Suggests He Get A Job At Dominos
Next GOP Rep. Chris Collins: Republicans Are Mum On Flynn Because They’re Celebrating Valentine’s Day [VIDEO]