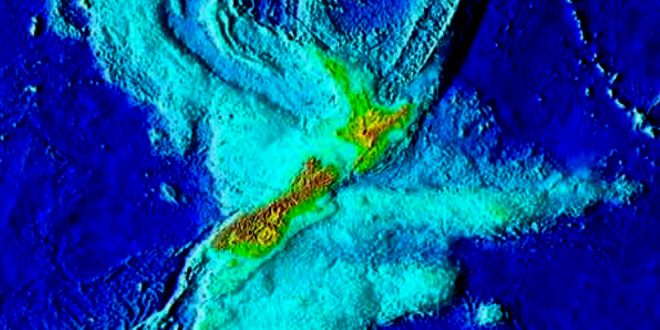 Enter The New Continent Of Zealandia

We’re taught in elementary school that there are seven continents on Earth — Africa, Antarctica, Asia, Australia, Europe, North America and South America. But geography textbooks across the world might have to add one more to that list — Zealandia.

Zealandia is a continent that is 94 percent submerged underwater, which is why it took so long for geologists to identify it. The 6 percent that is above water comprises what many know as New Zealand and New Caledonia, according to a study in GSA Today, the journal of the Geological Society of America.

Zealandia spans almost 2 million square miles, a bit larger than India. And while the idea of a mostly submerged continent in the Pacific has been known in the science community for a while, it was only in the last two decades that researchers accumulated enough data and observations to classify it as the world’s eighth continent.

“Several islands, notably New Zealand and New Caledonia, are connected by submerged continental crust across a large area of Earth’s surface,” the authors explained. “This region has elevated bathymetry relative to surrounding oceanic crust, diverse and silica-rich rocks, and relatively thick and low-velocity crustal structure.” “Its isolation from Australia and large area support its definition as a continent — Zealandia,” they said.

Zealandia once made up approximately 5% of the area of the supercontinent Gondwana, according to the team. “It contains the principal geological record of the Mesozoic convergent margin of southeast Gondwana and, until the Late Cretaceous, lay Pacificward of half of West Antarctica and all of eastern Australia,” the researchers said. “Thus, depictions of the Paleozoic-Mesozoic geology of Gondwana, eastern Australia, and West Antarctica are both incomplete and misleading if they omit Zealandia.”