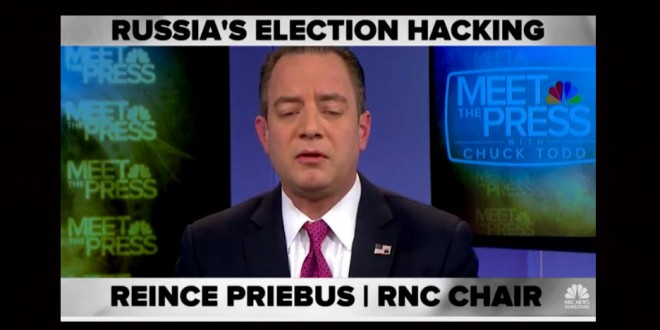 Reince Priebus vehemently denied that the Republican National Committee had been hacked alongside its Democratic counterpart as part of what the CIA concluded was a Russian attempt to influence the outcome of the United States election in Donald Trump’s favor.

“Number one, the RNC was not hacked. I don’t know of any employees, on any of their own Gmail accounts, that was hacked. So what I’m trying to tell you is the RNC was not hacked, number one,” Priebus, who is the outgoing RNC chair, said on NBC’s “Meet the Press” in response to a question about whether he and President-elect Donald Trump have confidence in U.S. intelligence officials.

“Here is what I’m saying. Number one, you don’t have a single source — I’ve given you a source specifically, me, who runs the RNC, to say that the RNC was not hacked. You tell me who the specific source on the other side of this that says the R.N.C. was hacked,” Priebus said. “But my question’s not about the RNC,” Todd said.