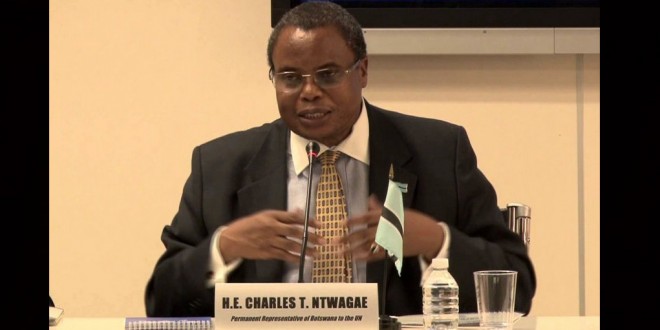 African states launched a bid at the United Nations on Friday to halt the work of the first U.N. independent investigator appointed to help protect gay and transgender people worldwide from violence and discrimination. The 47-member U.N. Human Rights Council, based in Geneva, created the position in June and in September appointed Vitit Muntarbhorn of Thailand, who has a three-year mandate to investigate abuses against lesbian, gay, bisexual, transgender and intersex (LGBTI) people.

In an unusual move, African states circulated a draft resolution on Friday in the 193-member U.N. General Assembly third committee, which deals with human rights, calling for consultations on the legality of the creation of the mandate. “We therefore call for the suspension of the activities of the appointed Independent Expert pending the determination of this issue,” Botswana’s U.N. Ambassador Charles Ntwaagae [PHOTO], speaking for the 54-member Africa group, told the committee.

He said the group was concerned “non-internationally agreed notions such as sexual orientation and gender identity are given attention, to the detriment of issues of paramount importance such as the right to development and the racism agenda.” Ntwaagae said that sexual orientation and gender identity “are not and should not be linked to existing international human rights instruments.”

The language in the resolution questioning the “legal basis” for creating an LGBT watchdog is especially “insidious,” added Human Rights Watch’s LGBT Program Director Graeme Reid, because “the implication is that LGBT rights don’t belong in the human rights system at all.” Only a handful of UN resolutions mention LGBT issues, and LGBT rights opponents contend that sexual orientation and gender identity are not matters covered by international law.

If it passes, it could set up a complicated showdown between the Human Rights Council and the General Assembly. Vitit Muntarbhorn has already taken up the position, and it is not clear that this resolution would put a halt to his work even if it passes. Neither Muntarbhorn nor a spokesperson for the presidency of the Human Rights Commission responded to requests for comment for this story.

And the resolution stands a very good chance of passing. The resolution was introduced by the 54-member Africa Group without any dissenting members. That group includes South Africa, which introduced the first LGBT rights resolution in the Human Rights Council in 2011 but withheld its support for the creation of the LGBT watchdog position. The resolution is also assumed to have the support of almost every nation of the Organization of Islamic Cooperation — which would add at least 20 additional votes for the resolution. (Albania is the only member of the Organization for Islamic Cooperation that supports the LGBT watchdog position.) Russia and Belarus have also been leading opponents of efforts to promote LGBT rights inside the UN.

Human Rights Watch explains how the position came into being:

Human Rights Council resolution 32/2 on Protection against violence and discrimination based on sexual orientation and gender identity was jointly presented at the 32nd regular session of the Human Rights Council in June 2016 by Argentina, Brazil, Chile, Colombia, Costa Rica, Mexico and Uruguay. The resolution was adopted with 23 votes in favour, 18 against and 6 abstentions.

The text builds upon two previous resolutions: the first presented by South Africa in 2011, and the second by Brazil, Chile, Colombia and Uruguay in 2014. These previous resolutions mandated two reports by the UN High Commissioner for Human Rights, which documented both serious violations and positive developments in all regions of the world. The High Commissioner highlighted, however, serious protection gaps, and noted the need for a mechanism to bring more systematic attention to the issues. In response to this, resolution 32/2 created an Independent Expert tasked to engage in dialogue to address these issues constructively.

Following the appointment by the Council, Prof. Vitit Muntarbhorn commenced his work as the Independent Expert on 1 November 2016.