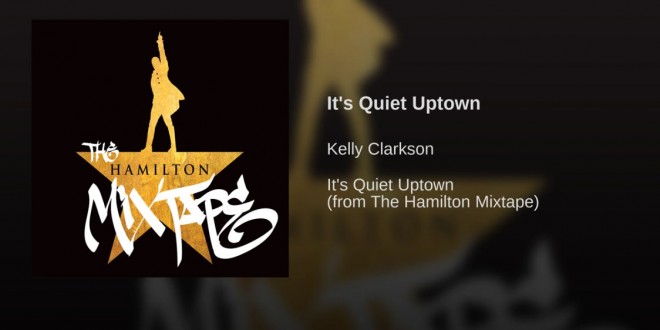 Look at where we are, look at where we started. We started with Lin-Manuel Miranda rapping about Alexander Hamilton at the White House one evening and now we have artists like Kelly Clarkson, The Roots and Busta Rhymes putting their personal spins on the incredible songs from Hamilton.

The Hamilton Mixtape, a compilation of covers of the hit musical’s songs with some demos from Miranda, is coming our way Dec. 2, but two of the songs came early. And we may or may not have listened to both of them about 100 times already.

First we have Clarkson doing a rendition of It’s Quiet Uptown. The song is from the musical’s second act, and is sung in the show after (spoiler alert for American history) Alexander’s son is killed in a duel. The mournful ballad fits perfectly with Clarkson’s soft pop style. You might expect to hear her cover right after Because of You on an album.

In a completely different preview track we have My Shot [Rise Up Remix] by The Roots featuring Busta Rhymes, Joell Ortiz and Nate Rues. In the show, Hamilton sings this song early in Act I, and it’s the song that establishes the character as the hero of the piece. Miranda has said the song took him years to write. In the show, the song also features Hamilton’s friends Jon Laurens, Hercules Mulligan and the Marquis de Lafayette. Miranda has also said that he based Mulligan’s rap style on Busta Rhymes. In the remix, Busta gets his shot at verses.