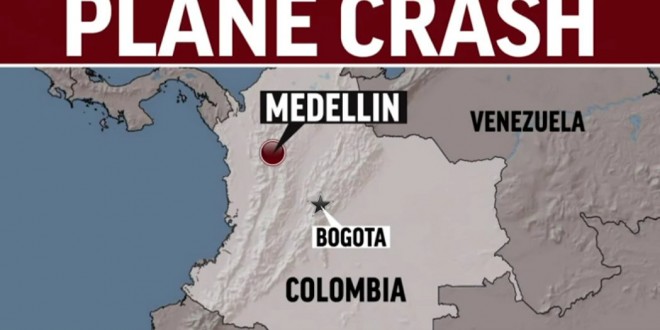 A chartered plane with a Brazilian first division soccer team crashed near Medellin while on its way to the finals of a regional tournament, killing 76 people, Colombian officials said Tuesday. Only four people are believed to have survived.

The British Aerospace 146 short-haul plane, operated by a charter airline named LaMia, declared an emergency at 10 p.m. Monday (0300 GMT) because of an electrical failure, aviation authorities said. As CBSN’s Josh Elliot reports, the plane crashed not long after that, just five minutes from its destination.

The team, from southern Brazil and which had started its journey in Sao Paulo, was scheduled to play Wednesday in the first of a two-game Copa Sudamericana final against Atletico Nacional of Medellin.

“What was supposed to be a celebration has turned into a tragedy,” Medellin Mayor Federico Gutierrez said from the search and rescue command center. The club said in a brief statement on its Facebook page that “may God accompany our athletes, officials, journalists and other guests traveling with our delegation.”

One of the players, goalkeeper Danilo, who was among those initially rescued and brought alive to a hospital, later died of his injuries, a spokesman for the Brazilian soccer club confirmed. Team spokesman Andrei Copetti announced the death to The Associated Press, adding that another goalkeeper was reported to be among the four remaining survivors.