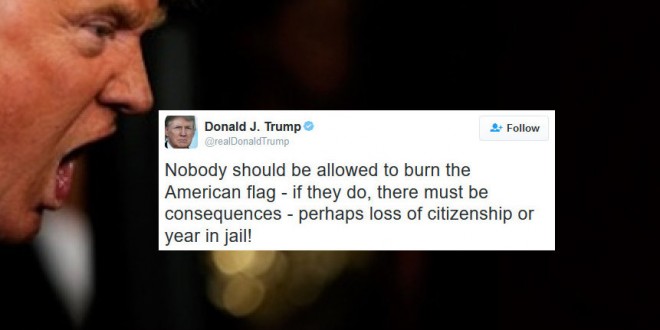 The First Amendment is for losers. Via Politico:

Burning an American flag should be a crime, President-elect Donald Trump wrote on Twitter Tuesday morning, punishable by a forfeiture of U.S. citizenship or a year in jail. Laws prohibiting the burning or desecration of the American flag have been struck down by the Supreme Court, most recently in 1989 and 1990, because they were found to have violated the First Amendment of the Constitution, which protects freedom of speech.

In its 1989 ruling, the Supreme Court upheld the right of protests to burn the flag in a 5-4 decision, with Justice Antonin Scalia siding with the protesters. He later said he based his ruling on a “textural” reading of the Constitution, according to the Constitution Center blog. “If it were up to me, I would put in jail every sandal-wearing, scruffy-bearded weirdo who burns the American flag,” Scalia said in 2015 in Philadelphia. “But I am not king.”

If Trump wants to imprison flag-burners, imagine what he’ll try to do to journalists who report on his corruption

1A doesn't just protect speech "we" like. The idea that the standard for legality is whether you like it – frightening #flagburning

Previous COLOMBIA: 76 Killed In Charter Plane Crash
Next Roger Stone: Trump Is More Likely To Prosecute Hillary Due To Her Campaign’s Support For The Recount