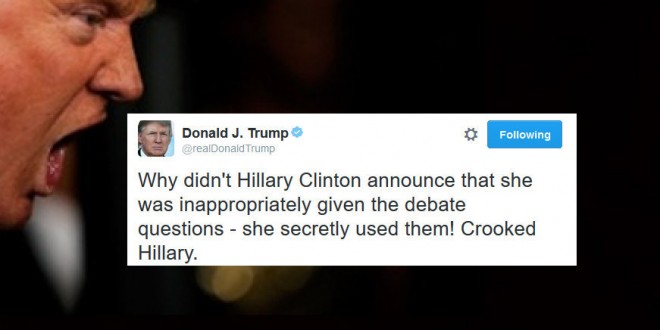 Trump Accuses Fox Anchor Chris Wallace Of Cheating: Hillary Was Given The Debate Questions In Advance

Donald Trump just accused Fox News anchor Chris Wallace of providing Hillary with last night’s debate questions in advance. Yep. And of course, he’s gleefully tweeting out the results of click polls showing him as the runaway winner. Meanwhile Twitter’s conspiracy machine is in full tilt with claims that Hillary used a secret earpiece (again!), that her bodyguards were anxiously poised offstage with emergency meds, that her podium had a hidden video screen, and on and on and on.

Look at the angle of Hillary’s gaze. She is NOT looking down at her notes, she is looking AT the lit panel. pic.twitter.com/sl3eZEP5b8

Hahahahaha Chris Wallace is in on the conspiracy too https://t.co/CCVgnTfRct

Trump going after Fox News as pro-Hillary to get an opening for Trump TV https://t.co/MupKENaoMk