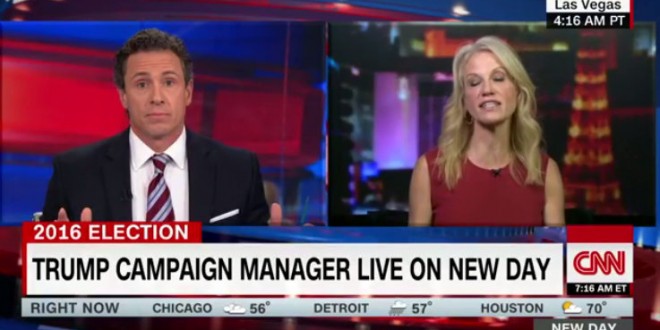 In an interview with Chris Cuomo on CNN, the campaign manager attempted to argue that Trump’s speculation about the integrity of the election system was akin to Al Gore’s initial refusal to concede the 2000 presidential race to George W. Bush.

“Everybody, including Al Gore in 2000, waits to see what those election results are, if they’re verified, if they’re certified,” she said. “Al Gore himself called to concede that race in 2000, and then called back to retract that concession.”

But Cuomo quickly countered, pointing out that Bush’s slim margin of victory in Florida automatically triggered a recount in the state, which was governed at the time by Bush’s brother Jeb. Further, Cuomo added, Gore had already won the popular vote nationwide, and it was Bush who brought the case to the Supreme Court.

“This is different,” Cuomo said. “Donald Trump is saying right now, with weeks ago, I think it will be rigged against me, so I’m not going to respect it. That’s not what happened in 2000, as we both know very well.”

Things got very heated after that.