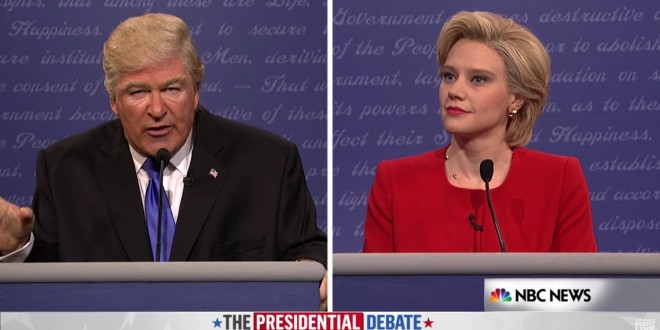 In the cold open, Lester Holt, played by Michael Che, asked many of the same questions the two candidates faced Monday night, including how they would create more jobs if elected president.

“I’ve got a very presidential answer for this,” Baldwin’s Trump said. “Our jobs are fleeing this country. They’re going to Mexico. They’re going to Jina. I would stop that. If Hillary knew how, she would have done it already. Period. End of story. I won the debate, I stayed calm, just like I promised, and it is over. Goodnight Hofstra.”

Like much of America on debate night, “Clinton” is amazed and amused by some of Trump’s answers, his constant sniffling and his whining that the microphone is broken. In the sketch, the Democratic candidate even offered her two minutes of speaking time to Trump so he could spout more inane stuff.

Previous NY Times Bombshell: Trump May Not Have Owed Any Federal Tax For 18 Years Due To Business Failures
Next Trump Responds To Federal Tax Bombshell