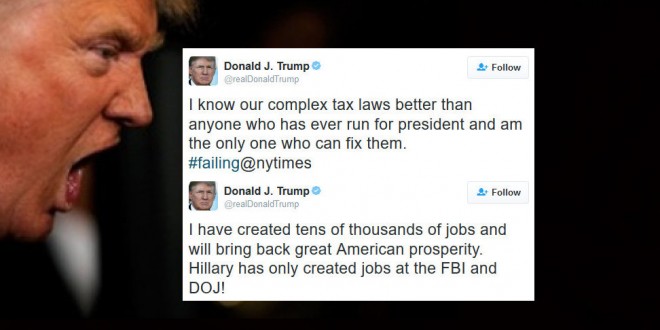 Donald Trump early Sunday said he knows tax laws “better than anyone who has ever run for president” following a report that he could have legally avoided paying taxes for years. The Republican presidential nominee tweeted that he is “the only one who can fix” U.S. tax laws.

The New York Times reported late Saturday that a $916 million loss on Trump’s 1995 income tax returns could have allowed him to legally avoid paying any federal income tax for up to 18 years. At the first presidential debate last Monday, Democratic nominee Hillary Clinton accused him of not paying federal income taxes. “That makes me smart,” he replied.

Clinton’s campaign manager, Robby Mook, pounced on the newspaper’s report, saying it “reveals the colossal nature of Donald Trump’s past business failures and just how long he may have avoided paying any federal income taxes whatsoever.”