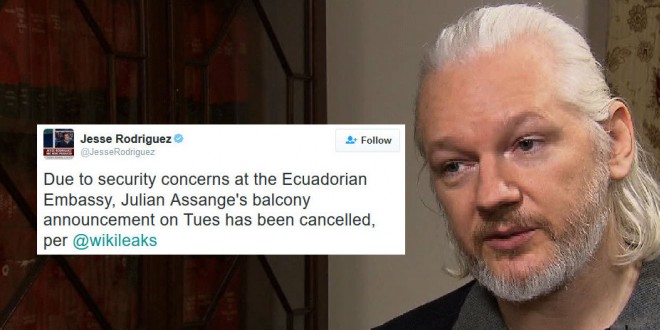 Wikileaks has abruptly canceled a much-anticipated announcement on Tuesday, according to NBC News. The announcement had been expected to be founder Julian Assange’s long-promised document dump on Hillary Clinton.

NBC’s Jesse Rodriguez reported that the Tuesday announcement — which was to come from the balcony of London’s Ecuadorian Embassy, where Assange has sought sanctuary for years – was canceled due to “security concerns”. Wikileaks has not said when it will now make its “announcement”.

The political provocateur and bomb-thrower Roger Stone, a fervent Donald Trump supporter, predicted Sunday morning that Wikileaks’ revelations would doom Clinton’s campaign. It’s unclear if Stone was aware that Wikileaks, according to NBC News, has canceled their Tuesday announcement.