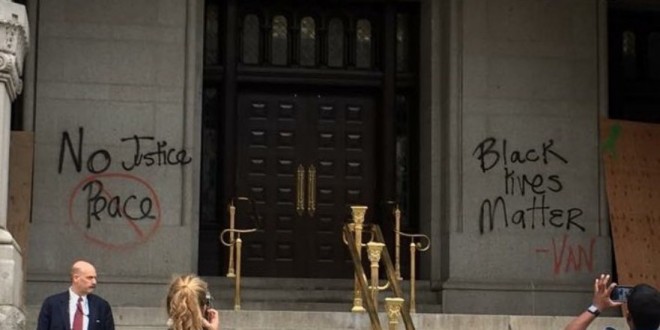 Donald Trump’s brand-new Washington hotel was vandalized Saturday with messages supporting the Black Lives Matter movement, according to D.C. police. The spray-painted slogans appeared on either side of the entrance to the Trump International Hotel, which opened its doors last month. Photos posted on social media indicated that the hotel attempted to cover up the defaced portions of the facade with wooden boards.

“On October 1st at approximately 4:03 p.m., officers received a call about destruction of property at the 1100 block of Pennsylvania Avenue NW, which is also the Trump International Hotel,” Metropolitan Police Department spokeswoman Aquita Brown said. “We are investigating an offense of defacing public and private property.”

Removing the spray paint could be routine at an ordinary building, but the Trump Hotel operates under special requirements imposed by its 60-year lease with the federal government. Many of the restrictions requiring consultation with preservationists and federal officials are aimed at preserving the historic Old Post Office building even as Trump attempts to operate a luxury hotel in the 125-year-old facility.