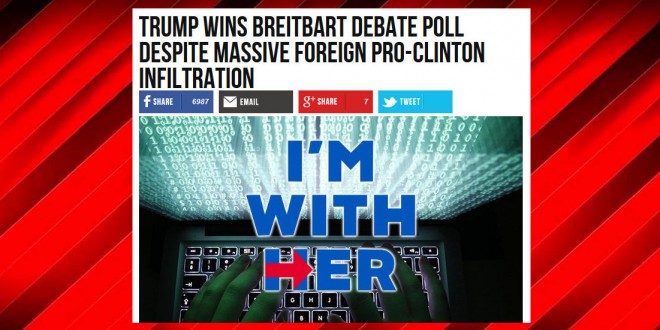 But they give no admission that Trump’s trolls did the same thing to recent click-polls on many mainstream sites. Via Breitbart:

Republican presidential nominee Donald Trump has overtaken Hillary Clinton on a Breitbart debate poll, despite a stream of overseas Clinton bots skewing the results in favour of the Democratic nominee.

The original results of the poll were gleefully reported by networks such as CNN, who claimed the “far-right website Breitbart surprisingly had Hillary Clinton winning the final presidential debate by 6 percentage points early on Thursday.”

However, Breitbart can now reveal that the poll was actually infiltrated by foreign IP addresses, with thousands of votes coming from countries such as Romania, Germany and South Korea, who overwhelmingly voted for Hillary Clinton as the winner of the final presidential debate.

Yet despite the influx of Clinton bots, who managed to skew the poll into suggesting Clinton had a 6-point lead, Trump has since overtaken her, regaining an 8-point lead in a poll of nearly 300,000 people (and bots.)