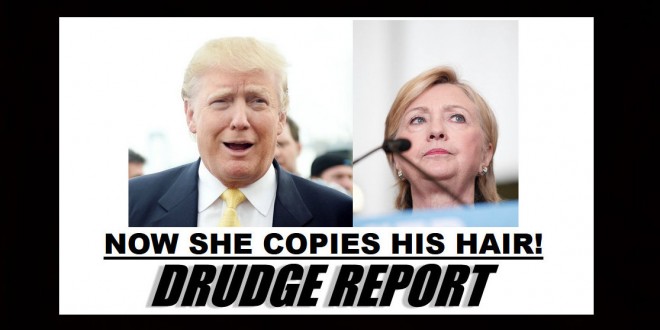 Back in November, closeted homosexual blogger Matt Drudge unleashed a tweetstorm in which he repeatedly accused Hillary Clinton of wearing a wig. And today we get this:

The foremost link redirects to a Tweet from Drudge’s from early this morning that alleges, “After shifting policies to mirror Trump… now she copies his hair!” with a side-by-side photo of the two major party nominees: Donald Trump and Hillary Clinton. Of course, there’s nothing more of substance to the claims other than the photos, but Drudge is correct on his first assertion: there did seem to be a notable shift in tone regarding trade from the Clinton camp that made the Democratic party nominee sound like Trump.

After shifting policies to mirror Trump… now she copies his hair! pic.twitter.com/2cAQYGBb7m

Previous UNSKEW FAIL: Breitbart Poll Has Hillary +5 Nationally
Next GOP Organizer Of Plea For RNC To Defund Trump Goes To FBI Over Anti-Semitic Abuse From Trumpbots