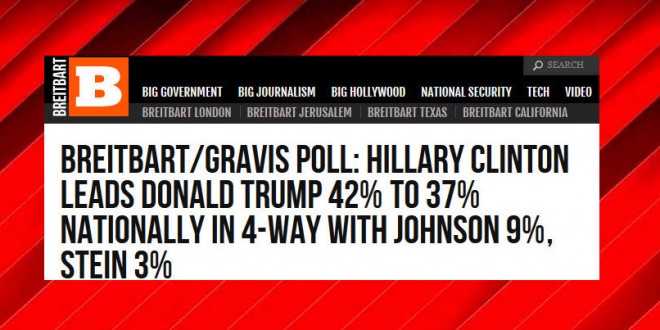 Aiming to address a recent slew of “mainstream media” polls showing Hillary Clinton holding a decisive lead over of Donald Trump, Breitbart News conducted its own survey. But the conservative news site came up with similar results.

In a poll out Sunday from Breitbart and Gravis Marketing, Clinton led a four-way contest with 42 percent of the vote to Trump’s 37 percent. Libertarian Gary Johnson earned 9 percent of the vote, while the Green Party’s Jill Stein received 3 percent.

Breitbart editor-in-chief Alex Marlow explained in a statement accompanying the survey that the site would launch its own series of polls to provide “an accurate assessment” of the 2016 race.

“It’s an open secret that polls are often manipulated and spun to create momentum for a particular candidate or issue,” Marlow said. “Breitbart News Network’s first national poll marks the start of a major initiative to give our readers an accurate assessment on where the American people stand on the key topics and people of the day — without the mainstream media filter.”

Most of the 10,000+ comments on Breitbart’s post still proclaim victory for Trump.