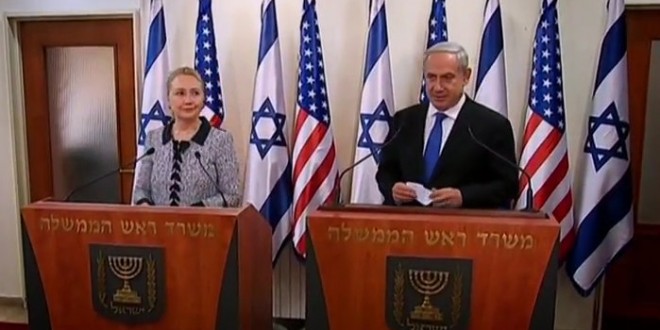 Watch below. Via press release from Hillary For America:

Clinton brokered an improbable ceasefire in Gaza to stop rockets from raining down on Israel. In Copenhagen, Clinton and President Obama crashed a secret meeting the Chinese had called, demanding a seat at the table to forge progress toward global action on climate change for the first time.

She traveled around the world, twisting arms and rallying all of the world’s major economies to build a crippling sanctions coalition that brought Iran to the negotiating table and paved the way for an historic deal to stop them from building a nuclear weapon.

And she was a tireless advocate for human rights, shining a light on human trafficking and fighting for the rights of women, girls and members of the LGBT community around the world.

The video, “67,” highlights these remarkable accomplishments from Hillary Clinton’s tenure as Secretary of State – and the tenacity, judgment, and leadership that made them possible – as told by the many people who worked alongside her.

Previous Ted Cruz Money Beg: Somebody Might Run Against Me In Two Years So You Must Donate Right Now
Next NIELSEN: Dems Smash GOP In Convention Viewers