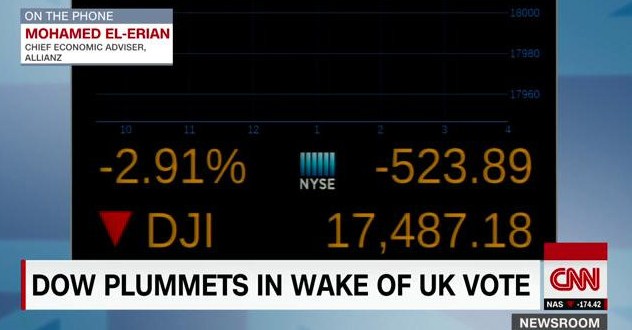 The Dow Jones Industrial average plunged 500 points on Friday morning — the index’s biggest drop in 10 months — as markets around the world reacted to a vote by citizens of the United Kingdom to leave the European Union.

As America woke up to the news of the economic fallout following the UK’s vote, Wall Street girded itself for what could potentially be the biggest market-moving day since the 2008 global financial crisis.

Blindsided by the winning “Leave” vote, global investors fled the market in search of safe havens such as gold, the Japanese yen, and U.S. Treasuries. As investors scrambled for any port in a storm, the dollar rose by more than 3 percent — the most in one day since 1978 — and gold soared to a two-year high, reaching 1,000 pounds an ounce.