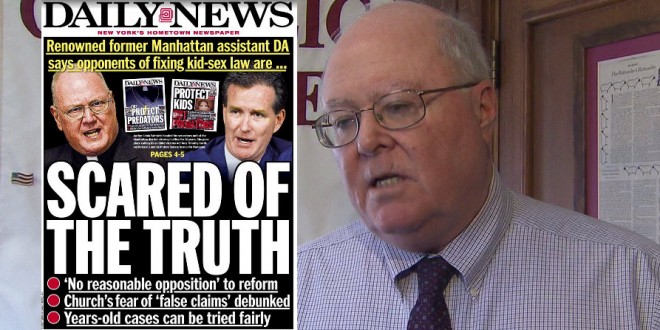 The New York Daily News today continued its weeks-long campaign against the opposition to reforming New York’s statute of limitations on child abuse. As I’ve reported several times, leading the opposition is the Catholic Church, which has literally spent millions in lobbying against the reforms. Here’s how Catholic League president Bill Donohue responded this morning:

The New York Daily News was bought by Mortimer Zuckerman in 1993 for $36 million; last year he weighed a bid by Cablevision to buy it for $1.00. Yes, one dollar. In January, it lowered its newsstand price to $1.00. To prove how little influence it has these days, the newspaper vendor on the northwest corner of 34th and 7th—across the street from the Long Island Rail Road and Madison Square Garden—has stopped carrying it. If there are no buyers there, it’s time to close shop. None of this is an excuse for its deceitful attack on Catholics. On the front page of today’s paper is a picture of Cardinal Timothy Dolan and State Sen. John Flanagan; both oppose bills that would lift the statute of limitations on crimes involving the sexual abuse of minors. With good reason: The bills have one target—the Catholic Church.

Actually, the Daily News is the fifth-most widely circulated daily newspaper in the United States, with a daily print run of over 500,000 copies.

Previous Florida’s Bill For Opposing Gay Marriage: $500,000
Next NBA Again Warns North Carolina About All-Star Game: We Need A Resolution By The End Of Summer