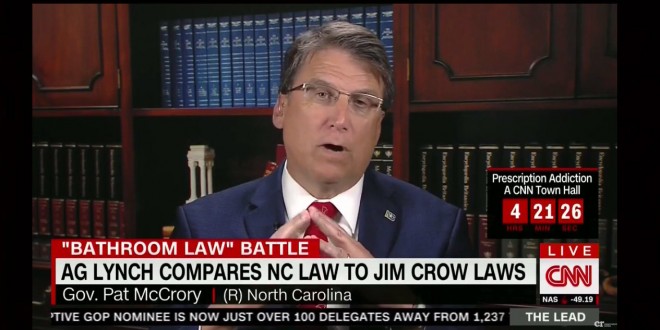 “It’s an insult, and it’s a political statement instead of a legal statement,” the governor said on CNN, referring to comments that Lynch delivered while announcing a federal civil rights lawsuit against McCrory and other state officials on Monday.

Lynch had invoked policies used to ban people of color from certain public spaces in a speech that alleged illegal discrimination against transgender people in North Carolina.

“It was not so very long ago that states, including North Carolina, had signs above restrooms, water fountains and on public accommodations keeping people out based upon a distinction without a difference,” she said.

But McCrory rebutted Wednesday, “Whether a boy can go into girls restroom — to correlate that to the civil rights movement — is totally irresponsible for the chief legal officer of the United States of America.”

McCrory went on the blame liberals and their “far-left agenda” for creating the issue in the first place.