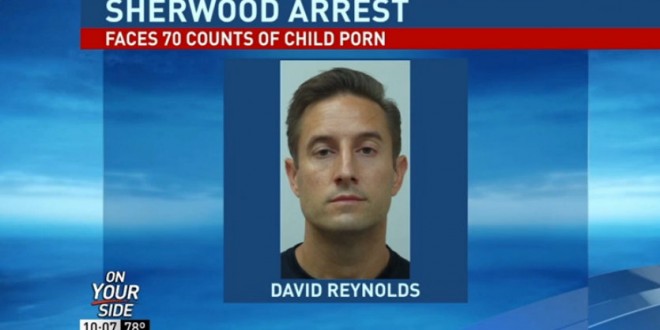 An Arkansas preacher has been charged with 70 felony counts of distributing, possessing, and viewing child pornography after a watchdog group tipped off authorities that he’d been trading the images via private messages on Twitter under the username “Candy Man.” Pastor David Reynolds of Cornerstone Bible Fellowship today pleaded not guilty to the charges. Reynolds’ church has issued a statement:

On March 7th the elders of Cornerstone removed Dave Reynolds from all responsibility at Cornerstone. Dave had informed two of the elders that he was engaged in pornography and thought the elders might learn of this from another party, hence he decided to inform us of his involvement in this sin. Those two elders specifically asked Dave if he had viewed under age pornography to which he replied that he had not knowingly done so.

Our present concern is with the people of Cornerstone to whom the Lord has entrusted us as shepherds. We have been and will continue to pursue all avenues to determine whether any of Cornerstone’s people may have been directly or indirectly affected by any actions Dave may have taken.

We are saddened that one who we trusted is accused of a crime and sin so significant and as defiling of humans as this. Yet we also remember that Dave denies any involvement in this crime and sin and, under the laws of Arkansas and the United States, remains innocent until proven guilty.

We have asked all of our people to join in prayer for our congregation, for any who may have been directly impacted by Dave’s actions and for his family and Dave.

From the “What We Believe” portion of the church’s website:

We believe that angels are powerful spirit beings who are distinct from human beings and from God. Some angels carry out the purposes of God, while others (who sinned and fell from Heaven) serve Satan, who is himself an angel.

We believe in the reality and personality of Satan and that, when given the opportunity, he attempts to defeat Christians. However, Christians can overcome Satan’s schemes by applying scriptural truth.

We believe in the personal, imminent return of Christ to earth in sovereign power and glory to establish His righteous rule, and look for a “new heaven and a new earth” in which righteousness dwells.

We believe that God has established marriage as a lifelong, exclusive relationship between one man and one woman and that all intimate sexual activity outside the marriage relationship, whether heterosexual, homosexual, or otherwise, is immoral and therefore sin.