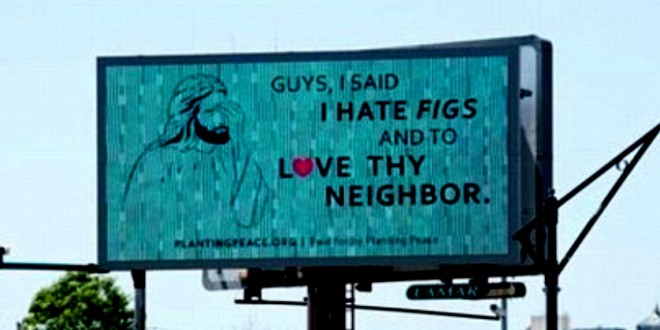 The group that created the rainbow flag house across from Westboro Baptist Church has struck again. The Daily Mail reports:

A humanitarian nonprofit has mocked Mississippi’s latest anti-LGBT legislation with a hilarious billboard. The sign, installed in Jackson, depicts an appalled Jesus saying: ‘Guys, I said I hate figs and to love thy neighbor’.

Planting Peace, which advocates for LGBT rights, has created orphanages in Haiti and India, dewormed starving children around the world and protected parts of the Peruvian rain forest, said in a statement it put up the sign to show how ‘ridiculous’ the new law is.

Mississippi’s governor signed House Bill 1523 on Friday, allowing public and private businesses to refuse service to gay couples based on the employers’ religious beliefs. The billboard, according to Planting Peace, pokes fun at literal interpretations of the Bible.

‘In Matthew 21: 18-22, Jesus literally curses a fig tree. But we don’t see a lot of “God Hates Figs” protests or cries for stronger legislation regulating figs,’ Planting Peace added. ‘It’s heartbreaking to see in this day and age groups are still fighting so hard to restrict basic human rights of others based on claims of religious freedom.’

In the Bible passage quoted by Planting Peace, a hungry Jesus finds a fig tree without fruit on it and tells it: ‘May you never bear fruit again,’ prompting the tree to wither immediately.

Even in the face of landmark legislation from the Supreme Court bringing marriage equality to every corner of our nation, the anti-LGBT movement continues to seek ways to take us backwards. The most recent example is a “Religious Freedom Bill” championed by the governor of Mississippi, legislation that allows people to cite “religious objections” that would enable them to deny wedding services and be legally protected for a range of discriminatory actions against the LGBT community.

As has been painstakingly observed time and time again, the anti-LGBT movement is comprised of a substantial number of zealots who unfailingly refer to their rigid interpretation of religious text to narrowly define “traditional” institutions and values. They pick and choose what they wish to convey as immoral and unacceptable, while seemingly sweeping lines of scripture just a few letters away completely under the rug. In response, Planting Peace has constructed a message to the Mississippi legislators and the anti-LGBT movement.

It is important and relevant to call this out, because these messages and actions are not simply about a political or religious debate. There are LGBT youth across the world who are taking their lives at an alarming rate because of these messages from society that make them feel broken or less than. We have to meet hate with love…intolerance with compassion. To deny any individual basic human rights based on your individual beliefs is outrageous and unethical.