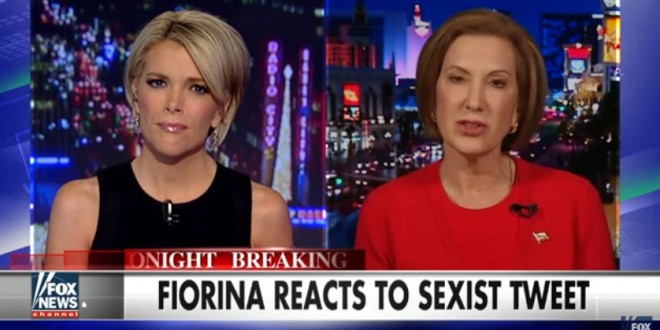 Lots of outlets are gleefully noting all the times that Carly Fiorina attacked Ted Cruz, so let’s also play along:

Back in December, a top Ted Cruz surrogate launched a sexist attack on Carly Fiorina, tweeting that Fiorina went “full vagina” during a debate. Steve Deace, an Iowa-based talk show host, not only endorsed Cruz but is also a prominent campaign surrogate for the Texas senator. Cruz has hailed Deace as “a truth-teller, a courageous conservative, and a powerful voice for liberty,” featured him in a campaign advertisement and added him to his Iowa leadership team.

Deace eventually apologized for the anti-Fiorina tweet, saying that his wife told him to. When Fox News’ Megyn Kelly asked Fiorina about Deace’s comments, Fiorina noted that Deace “is more than a radio talk host, he is a major surrogate of Ted Cruz and a major endorser.” “And this is why Ted Cruz cannot possibly beat Hillary Clinton,” Fiorina said.