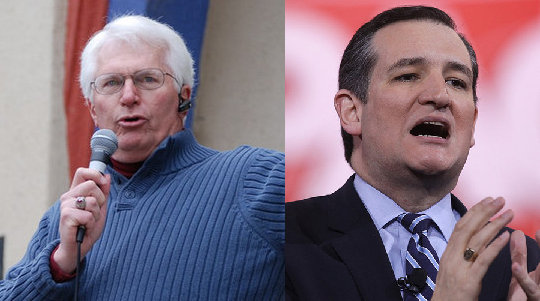 Yesterday Ted Cruz was supposed to share the stage with raving loon Bryan Fischer, but his campaign canceled the event, saying Cruz is “very very ill.” The Biloxi Sun-Herald reports:

“I got a call from the national campaign chairman and he said he’s known Cruz for a long time and he’s very very ill,” State Sen. Chris McDaniel, Cruz’s Mississippi campaign chairman, said.

“He wants to try to come. He’s been to the doctor, he got the shots, the regimen, whatever they do to treat it, and he’s still hoping to make a pop-in but there’s no way he could make it to a full rally. It sounded like he was miserable.”

McDaniel said the illness wasn’t life threatening, but it made it impossible to do a full day of campaigning. “This is difficult news to deliver, but we trust that God has a plan for the campaign and for Mississippi.”

Maybe somebody at the Cruz campaign did some research into Bryan Fischer’s many insane statements, not the least of which is that the First Amendment only applies to Christians.