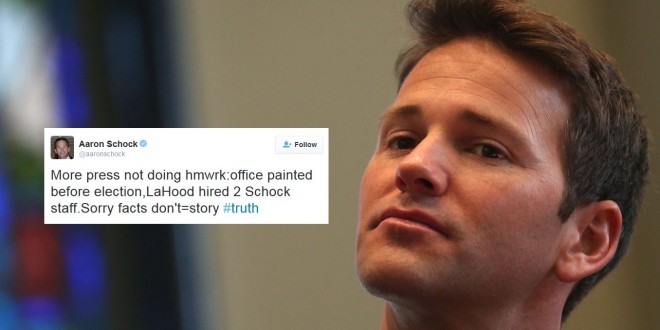 Former Rep. Aaron Schock today tweeted for the first time in nearly eight months to complain about a news item which reports that his House replacement has painted over Schock’s infamous Downton Abbey-inspired office. The Washington Post speculates that Schock might be setting the stage for a return to public life. They write:

The day after the first episode of Downtown Abbey’s last season aired, the congressman under federal investigation for alleged spending abuses like decorating his office in the spirit of the PBS show has broken his silence.

And he wants you to know this important fact: That his office was painted back to a more demure beige, as the Chicago-Tribune‘s Katherine Skiba reported, before the September special election to replace him. Oh, also that his replacement, Rep. Darin LaHood (R), who told Skiba the whole Schock affair was “disappointing,” actually hired some of Schock’s staff.

Those are small details, you could argue, for a congressman who resigned in March amid questions of his taxpayer and campaign spending habits and is now under federal investigation for said spending.

But the tweet suggests that while Schock has tried his best to let the public forget about him and his spending drama, he hasn’t forgotten about it. And he apparently thinks there’s a lot left for him to prove.

In breaking his Twitter silence, Schock is likely thinking about his political future –such as it is. He may forever be known as “the Downtown Abbey congressman,” but it’s certainly possible he could rise from the political dead. He is only 34; he was just 33 when he resigned.

Previous Obama Announces Action On Gun Control
Next Hillary Clinton: Aliens May Be Among Us